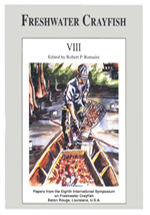 The early history of signal crayfish introducion into Europe

In the mid-1950s, there was a sudden paradigm shift in Swedish freshwater fisheries management. Apart from legal restrictions -- such as size and gear limitations, and closed seasons -- the release of newly, hatched fry or fingerlings had been the standard method of fisheries management. The number of annually released fry culminated from 5 million in 1905 to 235 million in 1939 (Hannerz, 1956). Ecologically-based criticism mounted, however, and the stockings declined to about 163 million in 1954.

Authorship information for this paper are currently unavailable.

No specific funding statement is available for this article.